China watchers everywhere have been fussing over that country’s recent crackdown on TV entertainment programs. On January 1st, Beijing officially put broadcast and satellite programmers across the country in the penalty box, severely limiting the number of dating shows, reality programs and other entertainment series they’re allowed to air. It seems that participants in many of these programs were revealing a salacious side of China that had the censors fuming.

In case you missed all the hoopla, this New York Times article does a nice job of summarizing the issue. One target for regulators’ ire was the dating show If You Are the One, which had attractive young women asking saucy and impudent questions of young men who were courting them for dates. In a particularly troublesome episode, an aspiring young actress named Ma Nuo rejected a hapless male suitor’s gentle request for a bicycle ride by slamming him with the now infamous retort, “I’d rather cry in a BMW.”

The problem with these shows was not only their encouragement of ‘immoral’ public behavior like craven displays of greed and sexual forthrightness; it was also that too many people liked them. With record-breaking audiences of 50 million regularly tuning in, and overseas Chinese also watching from abroad, the shows became victims of their own success.

Most of the behavior on these programs pales in comparison to anything one might see on a typical episode of “Jersey Shore.” But the mere suggestion that the Chinese proletariat might harbor feelings of lust, greed, or class bias was more than government officials could tolerate. It didn’t help that a couple of the female participants from these shows capitalized on their fleeting fame by doing nude photo spreads. Beijing’s regulators responded in draconian fashion, eliminating two-thirds of existing prime time entertainment programming on the grounds that it constituted “excessive entertainment.”

Now, it shouldn’t surprise anyone that China’s censors are particularly sensitive these days. 2012 is a major political year for China, with a leadership transition that will see an end to the decade-long reign of President Hu Jintao and Premier Wen Jiabo, and a handover to a new, younger generation of leaders. Such power handoffs are invariably accompanied by tightened content strictures.  The rules are almost always relaxed once the new leadership is comfortably settled.

But what’s puzzling is how the current leadership reconciles this ‘anti-entertainment’ stance with their stated goal of making China a powerhouse in the fields of film, TV, animation and publishing. Hu Jintao’s target for doubling the ‘culture industries’ contribution to Chinese GDP by 2016 translates into something like a half-trillion yuan in new annual business. If he thinks China will get there by exporting movies about Communist party heroes and documentaries about the PRC’s agricultural and scientific advances, he’s got another thing coming.

Being curious as to how programmers will fill the hundreds of weekly broadcast hours that are now vacated by banished ‘entertaining’ programs, I checked around to see what’s coming for Chinese TV viewers. Fortunately, I was able to access the inside scoop, and can now offer you, my privileged reader, an exclusive sneak peek at the upcoming, government approved, 2012 TV lineup. Here, in the words of Chinese broadcasters themselves, are a few of the exciting new shows that Chinese viewers can look forward to seeing: 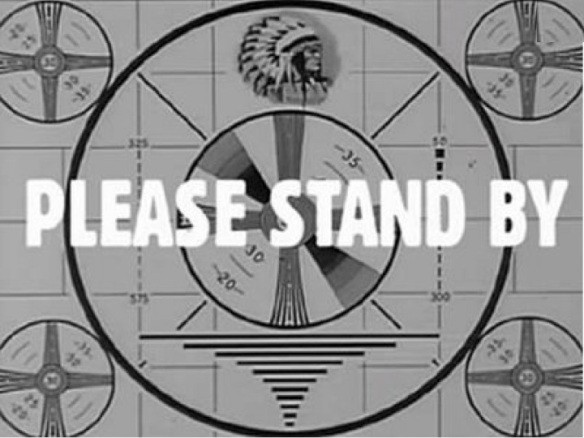 Test Pattern Mania! In this wacky but wholesome new hour-long series we take a look at test patterns from around the world. Don’t worry, (spoiler alert) it’s not a real emergency!

Weiwei Ai, Dissident Guy. Kids: thinking about a career as a Chinese political dissident? Well think again! In this no-holds barred reality series, China’s public enemy number one gives you a close-up look at what happens when you start actually saying out loud what’s on your mind. Sure, ‘human rights’ and ‘freedom of speech’ may sound cool, but take it from Weiwei Ai, Dissident Guy, house arrest sucks!

Woozy Shore.  A new reality show centered on a libidinous group of young people dropped into a house together, right on the toxic, polluted shores of infamous Bohai Bay. They think they’re going on a crazy Spring Break holiday, but see how quickly their lewd urges to misbehave cool off when they’re exposed to oil drilling sludge and lethal pollutants like lead, copper, and cadmium at levels 128 times higher than U.N. environmental standards.  Too much brain damage!

Our American Friends. In this travel-reality show, a former Chinese Ambassador to the United States travels the circles of power in America, giving the international gesture of friendship to everyone he meets. In the season’s finale he visits the cultural miscreants who create Hollywood’s mind-polluting movies and TV shows. And as they say in Hollywood, “Hijinks ensue!”

So You Think You Can Make Pants.  Cut 1, Stitch 2! Each week we go inside a different pants factory and watch assembly lines compete to see who can crank out the most trousers. Every episode’s ‘Pants-Off’ features a different kind of bottom, from blue jeans to khakis, chinos to capris. Contestants vie for incredible, never-before-offered prizes, like a full half-hour coffee break… for the entire factory! Go ahead, just try to resist the urge to start making pants yourself!