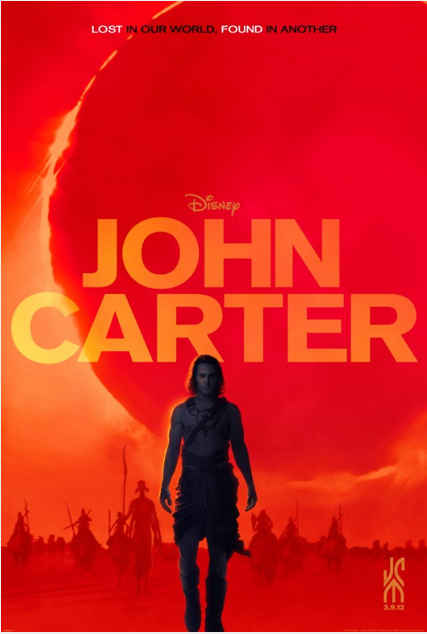 Last week saw a film that has made news headlines of late (but for all the wrong reasons) take the number one spot at the box office in mainland China.  John Carter, which Disney announced will result in a massive $200 million loss for the company, succeeded in usurping Stephen Spielberg’s War Horse at the top of the Chinese box office, taking in a solid $14 million over its first three days of screenings.  John Carter easily outdistanced the Hong Kong/China co-production A Simple Life, which earned $3.5 million to hold on to the second spot for the second week in a row.

For the first time in six weeks, Journey 2: The Mysterious Island landed outside the top 5, collecting $1.4 million to raise its China cume to an impressive $58 million, or nearly 20 percent of the film’s worldwide revenue.

Although John Carter was a drastic under-performer for Disney in the key North American market, the film opened extremely well in China. Carter’s $14 million debut ranked third amongst all opening weekends in the PRC this year behind Mission Impossible’s $15.7 million 2-day haul in late January, and Journey 2’s $15.2 million over three days in early February. More and more often China is becoming Hollywood’s biggest international territory, which goes to show just how strong the “Made in Hollywood” brand is there.

In his book As China Goes, So Goes the World: How Chinese Consumers are Transforming Everything, author Karl Gerth describes the rapidly evolving Chinese consumer culture. Gerth contrasts David Ogilvy’s visit to China in the early 1980s with the PRC’s consumer market of today. Thirty years ago, Ogilvy encountered a country with a near-total absence of advertising, and what advertisements there were contained little more than technical information, with no evocative images of the products to pique the interest of potential consumers.

Fast forward to today, and advertising in China is a giant industry, with over eighty thousand ad companies employing over a million people, making the Chinese advertising sector a larger employer than its counterpart in the United States.  And along with this growth has come a complete transformation of Chinese consumer culture.  To highlight this point, Karl Gerth quotes a thirty-something professional woman in Beijing: “Brand names are social status and quality of life. When I was in the United States, I didn’t pay much attention to brand names.  Here it’s a culture. Look at me now; I’m equipped with nothing but brand names, such as Gucci, Fendi, Armani, Versace, and the like.”

However, unlike in the United States, where ultimately it is left to the individual company to create its brand identity, in China, the central government views the development of strong national brands as an issue of national economic security, and thus takes a hands-on approach to the ongoing development of Chinese consumerism.

Gerth mentions that Chinese officials are hoping to emulate Japan’s success in rebranding its national products.  Today, the “Made in Japan” is a signifier of quality and excellence in consumer goods, but this was not always the case.  Forty years ago, a consumer product labeled “Made in Japan” would have been viewed as inferior to its American counterpart.

China’s current situation with its national brand identity is quite similar in certain ways to Japan’s forty years ago, but it remains to be seen whether China can successfully rebrand itself.  There are a few internationally recognized Chinese brands that signify quality, Lenovo being one of them. But one need only look back over the past few years to be reminded of big scandals involving Chinese goods that have done more to sully the “Made in China” brand than any successful Chinese brands have been able to help elevate the global reputation of Chinese products.

And so perhaps it might be helpful for those of us in the international film scene to look at what is going on with China’s film industry and theatrical market within the broader context of what is going on with Chinese consumer goods and culture in general. After all, for Chinese consumers, the preference for things made in the West extends far beyond movies, and the Chinese government’s film quota system and film co-production rules can be viewed as being very much in line with the tariffs and regulations that Beijing places on imported goods in other industries as well.  Many Chinese consumers meanwhile are caught between their general desire to support Chinese businesses and their genuine fondness for American and other Western consumer goods, and it will be interesting to see if and when the brand “Made in China” will start appealing to mainland Chinese consumers just as much as “Made in America” does today.

Albert Wang is an aspiring producer of US-China film co-productions who joined the Pacific Bridge Pictures team in December, 2011. His previous blog on US-China films can be seen at hollymu.com.