The Cain China Media Index (CCMI) of U.S. and Chinese-listed publicly traded Chinese media stocks tumbled by 4 percent last week, giving up all the gains it had made in the prior week and then some.

This loss far exceeded the weekly declines in the Shanghai Composite (-0.5%) and the Hang Seng Index (-1.3%), and was downright gloomy compared with the U.S. S&P 500, which gained 1 percent, and the Dow Jones U.S. Media Index, which was up by more than 2 percent. 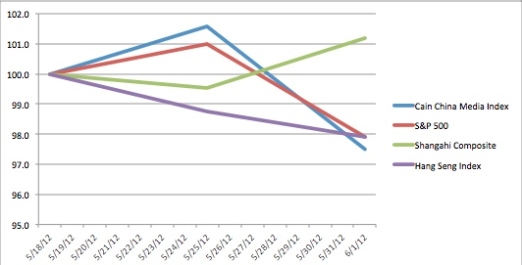 Losers outnumbered gainers by a heavy 3 to 1 ratio, with Perfect World Games (PWRD; -14%) and Youku (YOKU; -10%) shedding the biggest percentages. Perfect World fell on a less than perfect earnings announcement, having missed analyst earnings estimates and also having lowered its revenue projections for the next quarter.  Youku’s drop was more a retracement of the past week’s gains, part of the stock’s very choppy price history.

Not everything was bleak in Chinese media, however. Movie companies and broadcasters saw average gains of 1.3 percent and 1.8 percent, respectively. Enlight Media (Shenzhen 300251) turned in the best performance among movie company stocks, gaining 4 percent, and Shaanxi Broadcast & TV (Shanghai 600831) led the broadcasters with a 3 percent gain.

Many of the stocks in the CCMI are still in the black for the year, though with the rather sour mood of the global market weighing on these stocks, most have declined substantially from their peak prices. But with the sector continuing to grow at a much faster rate than China’s GDP, it’s likely that the stocks will rebound soon.