Pixar’s newest release, Brave, the tale of a rebellious princess who turns her mother into a bear, had a bear of a time at the Chinese box office last week, clawing out just $3.1 million during its first 6 days of release ending June 24th.

While other studios’ animated feature films have prospered in China’s theaters, Pixar’s films have consistently underperformed there. Brave earned 60 percent less in its first week than Madagascar 3 did in its third, and the Pixar film also trailed far behind a poorly reviewed Taiwanese action film, Black and White Episode I, that opened against it last week. 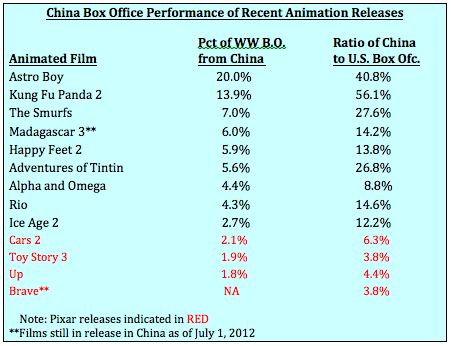 Pixar’s poor performance cannot be explained by inferior distribution or marketing, since virtually all major Hollywood animated films are handled in China by the same two companies, China Film Group and Huaxia, often working together. Rather, there seems to be something about the Pixar stories, and the way audiences perceive them, that leaves Chinese audiences cold. Whatever the reasons, the performance gap is so striking, and so consistent, that Pixar and Disney will want to address their shortcomings in China if they are to compete effectively against their rivals.