Thanks mainly to stellar attendance for Hollywood-made films, China’s box office racked up growth of 41 percent (as measured in US dollars) for the first half of 2012, with aggregate ticket sales of more than $1.25 billion through the weekend ending July 1. If China’s usual annual pattern of higher second-half ticket sales holds this year, the July-December period will account for around 60 percent of total revenue, and the year-end tally will exceed $3 billion.

China’s revenue growth continues to dwarf that of the U.S. and most other international territories. Even if the PRC’s blistering growth cools to just half of its current pace, it will supplant North America as the world’s largest box office market by 2020.

Note: India is excluded due to lack of reliable data.

Through the end of June, 2012, 8 films crossed the $40 million box office threshold, as many as reached that level in all of 2011. Only one non-Hollywood picture, the Hong Kong-China co-production Painted Skin: The Resurrection, cracked the top 10 films, at number 7.

Foreign films took more than two-thirds of all ticket revenue, a first-half record, and for 23 straight weeks from mid-January through late-June, Hollywood films topped the charts. But Chinese films will likely regain share in the second half, with Painted Skin 2 continuing its record-breaking run, and such highly anticipated releases as Feng Xiaogang’s 1942, Wong Kar-wai’s The Grandmaster and writer-director-producer-star Jackie Chan’s Chinese Zodiac coming to Chinese theaters later this year.

Action and adventure remain the top drawing genres, with more than 40 percent of revenues. But romance surpassed science fiction as the second most popular genre, as several love stories, most notably Titanic and Painted Skin 2, drew large numbers of moviegoers to theaters. Animation’s share has dropped from 15 percent in 2011, when Kung Fu Panda 2 set records and some very tough comps, to just 7 percent so far in 2012.

Two unmistakable trends in 2012 are the emergence of the female moviegoing audience as a major force in China, and the failure of Chinese filmmakers to connect with their own domestic audience. Romances and romantic comedies captured 28 percent of ticket sales in the first half of 2012, up from just 7 percent in 2011. Even if we take the outlier Titanic 3D out of the mix, romance/romantic comedies still more than doubled their market share in 2012. Domestic Chinese films (excluding co-pros), lost nearly half their market share, dropping from 25 percent in 2011 to just 14 percent in the first 6 months of 2012. 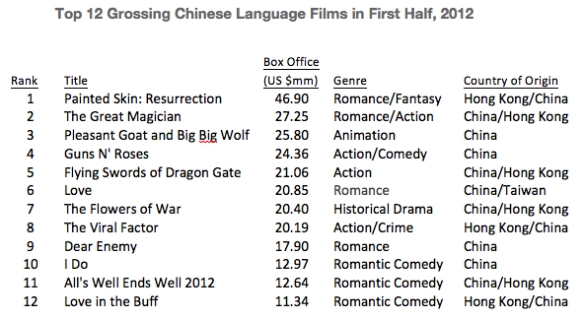 The challenge for Chinese filmmakers is simple: make better movies, target them better to the tastes of Chinese audiences, and do a better job of marketing them. China is and will remain the greatest growth opportunity for producers worldwide. Everyone should study the success of Painted Skin: The Resurrection, and the rest of the top-grossing Chinese language films, for lessons about what Chinese audiences want.