If you’ve read my previous columns you know that I’m no fan of the Chinese government’s film production- and distribution-related policies, and I’m certainly not a defender of the country’s tactics with regard to Hollywood. But I feel compelled to take exception to a recent series of articles in the American press that I believe unfairly characterizes China Film Group (CFG) as being single-mindedly devoted to curtailing the theatrical revenue of American studio films in the PRC.

In several recent articles (like this and this and this) the Los Angeles Times has decried China Film Group’s ‘aggressive steps’ to ‘curb the grosses’ of Hollywood tent-pole films by releasing pictures like The Dark Knight Rises and The Amazing Spider-Man against each other on the same weekend.

The Times and Variety also cite CFG’s decision to open Ice Age: Continental Drift on the same date as Dr. Seuss’ The Lorax, and a possible Bourne Legacy versus Total Recall showdown in September as further damning evidence that the Chinese are out to get Hollywood movies and put them in their place.

There’s no denyng that China’s film authorities wish to promote a healthy domestic film industry, and that part of making this possible means allowing room for locally made films to find an audience among Chinese filmgoers. Because few Chinese films this year have proven capable of competing head-to-head with American blockbusters, CFG has taken to coordinating release schedules to protect local films from Hollywood competition during key seasons like the summer school break, the October Golden Week holidays, and the year-end holiday season. As part of this effort, back in late June SARFT initiated a ‘film protection month’ (which will actually last for about two months) during which China will allow only 7 American imports to open at its multiplexes, and only two of these films—both 3D animated features—will be from major studios.

A key effect of this tactic is that it pushes back the releases of a handful of Hollywood tent-poles, squeezing several openings closer together than they might otherwise have occurred. But is China really targeting Hollywood films, as the Times put it, “to depress the box office receipts”? Is there a systematic campaign to punish American movies and drive down their grosses? I’m not seeing it, and on the whole the evidence doesn’t support this assertion.

Through the first 32 weeks of 2012, Chinese theaters released 54 films that were made in foreign territories. Of these, 25 were American films, and 7 more were U.S.-foreign co-productions like Killer Elite and Lockout. That works out to an average of exactly one American film every week, compared to barely one film every other week from the entire rest of the world combined. During this period American films took a 57 percent share of the nearly $1.6 billion in total PRC box office receipts, with the vast majority of that amount going to major studio pictures. 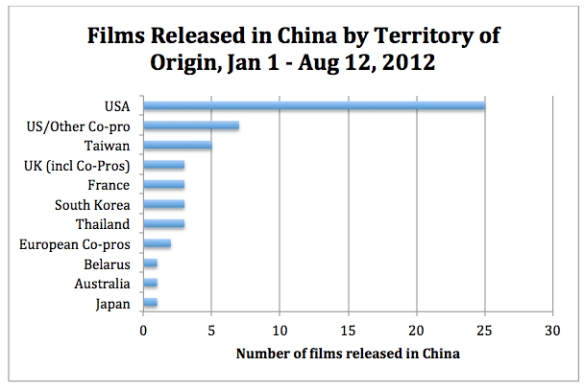 These are big numbers given that China’s obligations under the WTO don’t specifically require it to allow any American films into Chinese theaters. Yes, China must allow 34 imported revenue sharing ‘quota’ films annually under the updated (as of February, 2012) WTO agreement, but there’s no law that says these movies must be from major Hollywood studios.  If the Chinese were really intent on depriving Hollywood of renminbi they would be allocating a lot more of their quota slots to films from places like Iran, India and Brazil, or to indie films from specialty distributors like Magnolia Pictures and Strand Releasing. But they’re not doing that.

If anything, it seems to me that China has been surprisingly permissive with and solicitous of Hollywood’s studios. That such graphic films as The Dark Knight Rises (MPAA: “intense sequences of violence”) and The Hunger Games (MPAA: “intense violent thematic material and disturbing images”) are being allowed to screen at all came as quite a surprise to many Chinese filmmakers who would never be allowed, under China’s strict censorship rules, to indulge in the levels of violence and political commentary that these films enjoy. If China Film Group wants these films to fail, why is it going to so much trouble to bother releasing them, when it could easily and legitimately deny their releases on censorship grounds?

The truth is that China has rolled out a big fat welcome mat for Hollywood movies for most of this year. The average major Hollywood film opens on nearly 50 percent more screens during its opening week than the average major Chinese film, and is allowed to run for an average of 6 more days, or 15 percent longer, than the biggest Chinese movies. And let’s not forget that all these Hollywood movies are squeezing out domestic films; more than three-quarters of the movies made in China never receive a theatrical release.

Yes, the Times is right that for a few weekends this summer and fall, a handful of U.S. studio tent-poles will be forced to compete with each other for the same audiences. But China Film Group routinely does the same thing with Chinese films. One only has to go back as far as last week to find a comparable example, when four new Chinese animated films were released against each other.

And back in December, two hotly anticipated Chinese language tent-poles, The Flowers of War and Flying Swords of Dragon Gate, opened on the very same day. Both films did just fine, becoming respectively the 2nd and 4th highest grossing films released in China in 2011.

As much as China’s government authorities would like to see local films dominate the PRC’s multiplexes, they know that Hollywood movies are good business all around. Ticket sales from U.S. films help to build the country’s exhibition industry, which is still one of the most under-screened in the world. CFG makes far more money on each American film they release than they do on Chinese films, and that pays a lot of salaries and helps CFG build a war chest to fund domestic production. And tax revenues from ticket sales of American movies contribute to SARFT’s operating budget. In short, there are plenty of good reasons for CFG to maximize the revenues of Hollywood films.

SARFT and CFG do want to keep up appearances, and part of keeping up appearances is to help domestic films maintain a respectable share of China’s box office, ideally around 50 to 55 percent. When Hollywood movies squeezed Chinese films’ share down below 20 percent during the first half of this year, CFG was forced to take action, with the result that the major studio films will get a little less leeway for themselves for the rest of this year. Describing this shift as an attempt to ‘depress’ the grosses of American films overstates the situation and improperly encourages the impression of a hostile Chinese attitude.

The Dark Knight Rises and The Amazing Spider-Man will be just fine. Each of these pictures will release on several thousand screens in China, and each will earn at least $50 million in box office receipts there, which will be more than they earn just about anywhere else outside North America. The time to raise the alarm will be when China starts rejecting studio films that it should allow, or ghettoizing them to small numbers of screens in lower-grossing secondary markets. None of that has happened yet, and so long as the studios are respectful and play fair with the Chinese authorities, China’s welcome will remain wide open.