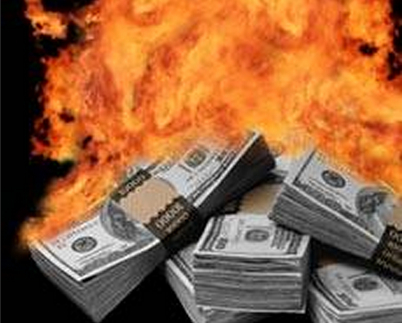 Although I’ve had a booming start to the new year, with several film and TV financing deals in the works, I’ve been vexed by one particular China deal that has remained mysteriously dead in its tracks. So vexed, in fact, I’m beginning to feel stupid about it. And I’m not talking about your garden-variety, average stupid. I’m talking world class, Hall of Fame, stupider even than Lance Armstrong or Manti T’eo stupid.

After all, how many people do you know who would be unable to find a way to spend $100 million?

And I’ll bet you’re thinking “none.” No one is that stupid. You can’t swing a dead cat without hitting at least ten people who would gladly accept $100 million.

But that, dear reader, is precisely the sorry reality I’m facing. Since last November I’ve had $100 million in Chinese money burning a hole in my proverbial pocket and I haven’t been able to find a single taker.

Lest you think this some sort of “joke” column I want to immediately disabuse you of that notion. I am dead serious. $100 million orphaned and with nowhere to go because of my shameful inability to persuade anyone to take it.

Now, to be fair to myself I ought to point out that I’m not looking for just anyone to accept this pile of cash. I’ve been looking specifically for a U.S. cinema chain owner who will sell his or her theaters for $100 million or more (I’m not aware of any upper limit) to a Chinese investor I represent. I’ve put enormous efforts into finding a seller with nary a bite so far.

It all started last summer when an investment banker friend called and asked whether I might help him find a buyer for his client’s mid-sized U.S. cinema chain. He and his client had watched in amazement as Wanda Group, in a now famous deal, overpaid by some $1 billion or so to acquire AMC Theatres. My friend’s client’s chain had been on the block for well over a year, and they wondered whether I might know a cash-rich Chinese buyer who would spend around $100 million to buy it.

I reached out to my network of Chinese investors, and before long, through the offices of a friend and frequent deal partner of mine, I came up with the perfect prospect. He was a very rich Chinese gentleman who not only knew the cinema business well, he was in fact eagerly looking to spend about $100 million to acquire a mid-sized U.S. cinema chain.

Now I’ll bet you’re thinking “so what, anyone can find a rich Chinese investor with $100 million eagerly looking to acquire a mid-sized U.S. cinema chain,” and I’m sure you’d be right, but for an oh-so-brief moment there I was actually pretty satisfied with myself. Sadly, I had no idea of what was coming.

I set up a meeting with my deal partner—let’s call him “Larry”—to visit my investment banker friend and present an offer. Larry and I made sure to emphasize that our buyer was “eager” and “motivated” and ready to obtain a travel visa so that he could visit the seller and begin due diligence. Oh, and most crucially, that he would move $100 million or more into a U.S. dollar escrow account the moment we said the word.

After we concluded the meeting Larry and I awaited reply from the seller. And we waited. And waited. After several weeks I finally called my investment banker friend in mid-November and asked when we should invite our investor to come to the U.S. to consummate the deal. And the banker told me that the seller was busy, that we should wait until after Thanksgiving.

After Thanksgiving came and went I made another call. Silly me, the seller was busy and Christmas was coming. Couldn’t we just arrange an hour’s meeting, I asked? Not possible, the seller can’t possibly afford the time. A phone call? No. An email? Let’s wait until the new year, I was told.

Now I may not be the sharpest chopstick in the drawer, but when the seller again rebuffed my overtures in January, I finally got the picture. He had changed his mind and didn’t think it necessary–or perhaps he was just too busy–to tell me directly.

So I moved on. I began a campaign to reach out to 20 more U.S. cinema chains that roughly fit the investor’s criteria.

Let me tell you, U.S. mid-sized cinema chain owners are unquestionably the hardest people in the world to reach. It’s not that they don’t return calls, it’s that they never answer their phones. And I mean never, ever, ever.  After my first dozen unanswered calls I worried that word might have gotten out about me, the guy who was trying to foist $100 million on some poor, unsuspecting cinema owner, so I began blocking my number before I dialed. But 20, 30, 40 blocked-caller ID calls later I still hadn’t gotten a single pick-up.

I could only assume these lucky chaps must be too busy counting all the piles of money they’re accumulating in their rapidly growing and hugely profitable theater operations. No outside distraction can be allowed to tear them away from the torrent of cash flooding into their offices on an hourly basis. I began to imagine the typical mid-sized U.S. cinema chain owner as a sort of king, a modern-day Midas who would scoff at a mere $100 million the way most of us would scoff at a dirty, germ-infested “LiveStrong” bracelet that had just been fished out of a sewer.

But then, in an unexpected twist of fate I received a return call from a cinema CEO whose 200-theater chain had just emerged from bankruptcy.  Grateful that such a demi-god would even deign to speak with a lowly mortal like me, I reacted eagerly, promising riches beyond his wildest imaginings, untold treasures in exchange for his pleasure palaces. He said he’d get back to me.

But he never did. I made several unanswered calls before I realized that I must have insulted this captain of industry with my vain offer of mere cash for his obviously priceless halls of cinematic nirvana.

Meanwhile, Larry had reached out to yet another cinema CEO, the head of an east coast based circuit. He too, said he would consider the offer, and then he disappeared forever.

Undaunted, I gave it one more shot, this time reaching another chain’s CEO through a warm lead, a friend who had known the CEO for years. And this time I took no chances. I made sure he knew that we would shower him with riches, that we’d do everything in our power to close the deal quickly, and I hinted that our investor would grossly, absurdly overpay for his cinemas. For good measure I added that Larry and I had managed dozens of deals before, that we had placed hundreds of millions of dollars in Chinese transactions, that we could provide solid references and irrefutable proof of funds. I promised everything I could think of short of staking the lives of our first-born children on the deal’s success. And if I’d have thought of it at the time I probably would have promised that too.

Alas, true to the patterns of his compatriots, this CEO disappeared. I made several more unanswered calls. I prayed to know what I had done to offend him. Finally, I received from him the email I had been dreading but at the same time fully expecting. Herewith, his exact words:

We are distracted with a lot of things going on with our business (remodels, digital conversions, launch of a phone app) and don’t have time to give something like this attention.

This was my Eureka moment. Finally, I had learned the truth, and I was duly humbled. How could I expect my pitiful $100 million to compete with the joys, the challenges, the sheer euphoric pleasure of launching a phone app? How could I have been so obtuse?!

So with the hard-won knowledge that to a U.S. cinema chain owner $100 million is about as attractive as the chewed gum stuck under a theater seat, I capitulated. I re-focused on my film financing deals, bruised but hopefully wiser for the experience.

Now I’ll bet you’re thinking “Hey, I can help out. I can take that $100 million off your hands. I won’t even charge you for the service.” And I greatly appreciate that thought, dear reader; your boundless generosity and kindness are truly heart-warming. But I couldn’t possibly impose. It’s my cross to bear, mine and mine alone. Please don’t write to offer your help, because I’m not asking for charity or sympathy. I’ve learned my lesson: A fool and his Chinese money are never parted.

11 thoughts on “A Fool and His Chinese Money…”