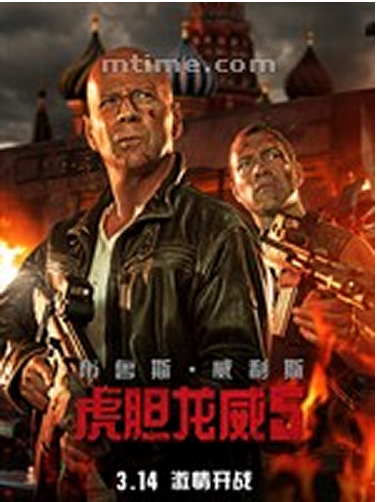 The months long stretch of American movies’ subordination to local films in China came to an end last week with the release of A Good Day to Die Hard, which earned $15.8 million in its four-day PRC debut. That was good enough for a solid first-place finish and contributed to a 73 percent weekly share for non-Chinese films, by far the best showing for foreign pics in China this year.

To be sure, Die Hard’s opening was solid but it wasn’t exactly a barnburner.  It ranked as only the third best opening weekend for an American film in China this year, and wouldn’t have rated among the top ten openings of 2012. But relative to its performance in the U.S. and other major territories, Die Hard’s $15+ million Chinese debut can be viewed as a true success. Its projected China tally of $38 to $45 million will easily trump its grosses in every other international territory, and will represent at least 12 percent of the picture’s worldwide total. Compare that figure to the 4 to 6 percent China indexes achieved by Skyfall, The Hobbit, and Jack Reacher, and the 2 percent index of Les Miserables. It’s the first time this year that a studio quota film will play at least as well in China as it does in the rest of the world.

Action remains the dominant genre at China’s multiplexes, with a 40 percent share year-to-date. The fantasy genre holds 28 percent share, due almost entirely to the success of one film, Journey to the West. Animation and romantic comedies have been especially weak so far in 2013, with just 5 percent and less than 1 percent, respectively.

China’s box office continues to blaze at a spectacular growth trajectory, with a year to-date total that is 45 percent ahead of the first 11 weeks of 2012. A $3.5 billion year-end total appears to be a reasonably safe bet, and even $4 billion is not entirely out of the question.