Several weeks ago I published an article asserting that China has surpassed Japan in box office revenue and is now, on a week-to-week and month-to-month basis, the 2nd largest theatrical market in the world after the United States. I forwarded this article to friends and acquaintances at several publications, including “The Los Angeles Times,” “The Wall Street Journal,” “The Wrap” and “The Atlantic Monthly.” To my disappointment and dismay not one of them picked up the story. I suspected that they and others doubted my figures were correct.

Over lunch in early February an acquaintance who runs international production for a major Hollywood studio confirmed my suspicion. He said he’d spoken with several of his executives and they told him that the numbers I was relying upon were wrong.

So I went back and double-checked my figures, and during the past few weeks while traveling in China I conducted further investigation. Having carefully studied the data and having interviewed a handful of experts in China, I must report that the studio executives were right, that my numbers were off. But not in the way they think.

My numbers for China, it turns out, were low; China is ahead of Japan by an even wider margin than I had thought, and it has been ahead for quite some time.

One major reason for the discrepancy is that I had failed to take into account China’s massive box office skimming. As I reported last week, according to most of the experts I consulted, as much as 40 percent of movie ticket revenue in China never makes it back to its rightful recipients, the distributors. If the ticket sales don’t get reported then they’re not captured in SARFT’s official figures, and so SARFT’s figures are too low.

But even if we disregard the skimming and rely on official figures—after all, the number that distributors care about is the amount that goes into their coffers—China still easily beats Japan by virtually every measure.

If skimming was indeed equal to 40 percent of gross receipts last year, then China’s real box office total for 2011 would have been close to US $3 billion, far ahead of Japan’s reported $2.2 billion.  While there may be some under-reporting in Japan, it is almost certainly modest compared to China’s, and there is little doubt that China has been out-grossing Japan for several quarters and possibly longer.

And why shouldn’t it? China now has more than 10,000 movie screens, with the number increasing daily. Japan, on the other hand, has only 3,400 screens and virtually zero growth. China’s box office for the first 8 weeks of 2012 was up by 49 percent relative to the same period in 2011; Japan’s was down by 3 percent .

Most important to those Hollywood studio executives I mentioned is how their own films fare in each market. And by this measure there’s no contest: China beats Japan hands-down. Each of the last ten Hollywood films to play in both markets earned more in China than in Japan, in most cases a lot more. The aggregate gross for the ten films in China was US $330 million versus $175 million in Japan. 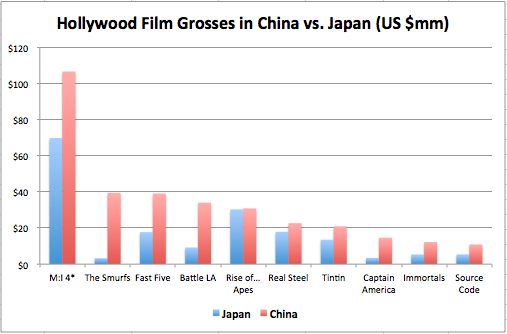 Assuming that Japan continues at its zero-growth pace for the rest of this year, and that China reaches $2.8 billion in officially reported revenues, the actual, unreported totals for 2012 would put China at $3.9 billion (2.8 billion plus 40 percent) and Japan at $2.2 billion.

So the question of whether China is bigger than Japan has been long settled. The real question now is how long it will take China to catch up with the U.S. It will happen faster than most realize, and when it does it will be too late for many to do much about it.

It was a December to remember in China, with the national box office hitting a new record at just over $2 billion. What has been most noteworthy about the past year—and the past decade—is the Chinese cinema industry’s extraordinary rate of growth. The quadrupling of the country’s overall economy in the decade since 2001 has been astonishing enough, but that was barely a blip compared to the nearly thirty-fold growth of China’s theatrical box office during the same period. In the blink of an eye China has matured from a minor film territory into an international powerhouse, the country to watch.

One of the bright spots in December was the ongoing competition between Zhang Yimou’s The Flowers of War and Tsui Hark’s Flying Swords of Dragon Gate. Both films performed extremely well, becoming the two highest grossing Chinese language films of 2011, with nearly $77 million in revenue for Flowers and $69 million for Flying Swords so far.  Both are in contention to possibly break the all-time record gross in China for a Chinese-language film, which is currently held by the 2010 release Let the Bullets Fly with $105 million.

And yet, in some ways December was a disappointment. Without a single major Hollywood film released during the entire month, Chinese audiences had limited choices at the multiplex, and many stayed away. For the week ending January 1st, revenues declined by 4.5 percent compared with the same week in 2010, despite higher ticket prices and nearly 3,000 new movie screens in operation. Per-screen averages were down by about 40 percent from last year.

The lone American opener was the Daniel Craig-Rachel Weisz ghost thriller Dream House, which echoed its weak U.S. opening with a tepid $1.4 million take at the Chinese tills.

Flowers and Flying Swords should continue to lead the market for the next two weeks, as there won’t be any serous competition until January 15th, when Sherlock Holmes: A Game of Shadows, hits the theaters. Things will heat up after that, with the Jay Chou action vehicle The Viral Factor opening on the 19th, and All’s Well Ends Well 2012 opening on the 20th.

Late in the fall American movies’ share of the Chinese box office was above 50 percent, but because the last Hollywood blockbuster release of the year—The Adventures of Tintin—came all the way back in mid-November, U.S. box office share drifted down to 46 percent by the end of the year. Home grown Chinese films captured a 24 percent share and China/Hong Kong co-productions took 22 percent. 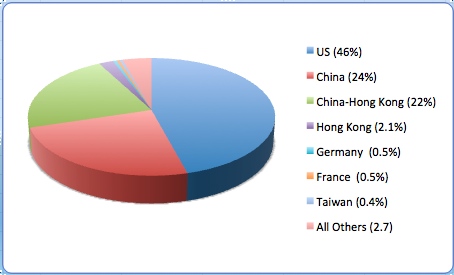 Look for more 2011 box office analysis in an upcoming post later this week.

Love is Not Blind has throttled its Hollywood competition for the second week in a row with a $14.8 million box office take last week, more than enough to hold off the unimpressive $9.2 million debut of Steven Spielberg’s The Adventures of Tintin. In just 13 days of release the indie hit Love has become the highest grossing romantic comedy in Chinese history, and the fourth biggest film overall at the box office in 2011.

Despite Tintin’s inauspicious release—it didn’t even crack the top 20 among opening weekends for films in China this year—overall box office was up by more than 50 percent over the same period in 2010, when the Chinese ancient costume comedy Just Call Me Nobody opened to $9 million. Just Call Me Nobody finished its run with over $24 million last December; it remains to be seen whether Tintin can reach even that moderate level of success.

Among other films in release, Rise of the Planet of the Apes added another $1.6 million for the week, boosting it into the ranks of the $30 million box office club, the 15th film of 2011 to reach this level. Only 10 films surpassed this mark in all of 2010—half of them Chinese and half imported from Hollywood—and only 5 films did so in 2009. Even more impressive, 31 films have now grossed at least $15 million this year, against only 17 for all of 2010 and 8 in 2009.  As the Chinese market matures it is clearly broadening both in the numbers of films that are making solid profits, and in the range of genres that are working.

One genre that appears on the surface to be working but which looks shaky under closer scrutiny is animation. The Chinese government has made domestic animation production a huge priority, investing heavily in facilities and equipment, but Tintin’s lackluster debut raises doubts about the wisdom of this investment initiative.  Of the 17 animated feature releases this year only three—Kung Fu Panda ($92mm), Smurfs ($40mm), and the Chinese-made Pleasant Goat and Big Big Wolf ($22mm)—can be deemed successes. Most foreign animated films have under-indexed in China relative to their success in the U.S. and international markets, and most home-grown animated films have been dismal failures.

Even animated films that perform well elsewhere often under-perform in China. Cars 2 earned only 2 percent of its global box office take in China, versus an average of 5-6 percent for other foreign filns, and Rio likewise disappointed. The problem may be over-supply. Because animation is one of only a few genres considered a safe bet to pass through China’s strict censorship process, producers and capital tend to gravitate to these projects, even when the scripts and artistic talent are lacking.

To be sure, there are some capable animation shops in China, but they may find it tough going in the years ahead as an increasing number of poorly made or poorly targeted films flood the market. The government should balance its enthusiastic investment in animation equipment and facilities with an equal level of funding for artistic training and  story-telling skill development.