Crisis in China’s movie business was narrowly averted on Friday when the country’s film authorities announced that they will award performance-based box office bonuses to domestic film distributors and to theaters, ending a weeks-long dispute that had each side threatening to boycott the other over revenue splits. Thanks to the feds’ intervention, the eagerly awaited release of Feng Xiaogang’s Back to 1942 will proceed as planned on Thursday, and Chinese moviegoers will enjoy a normal December movie season,

Tensions were high in mid-November when five of China’s biggest film distributors banded together to demand an increase in their shares of box office revenues from 43 percent to 45 percent. The five companies—China Film Group, Huayi Brothers Media Group, Bona Film Group, Stellar Mega Films, and Enlight Pictures—told theaters that if they didn’t get their way they would immediately start withholding the releases of their blockbuster movies, including Back to 1942 and Jackie Chan’s China Zodiac, both of which are expected to be major holiday season hits.

In a notice issued to theater chains, the five film distributors said that China’s domestically-made blockbusters have contributed significantly to the nation’s film market. Yet, they complained, as they continue to produce films using state-of-the-art technology, production costs will continue to rise. “Therefore,” the distributors asserted, “In order to boost the creation and production of domestic movies, improve their quality and gradually smooth over the economic relationships between the stages of producing, distributing and screening, we five companies have reached the consensus that the profit share proportion for distributors should not be lower than 45 percent.”

Theater operators responded by holding an emergency meeting of their industry organization, the China Film Circulation and Projection Association, on November 17th in Guangzhou. They published a combative response (copied below) to the distributors’ demands and offered some choice words to reporters, with veteran Wanda Cinema salesman Liang Liang telling a reporter, “I have only three words [for the distributors]: Go to hell!” 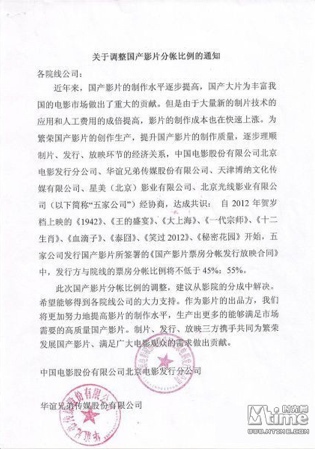 In their declaration, the theater operators deemed the distributors’ demands unacceptable, for the following reasons:

Note that most of these objections are moral and ethical ones, not legal arguments. It’s an interesting example of how business operates in a country like China, where contractual obligations are usually less important than relational ones.

Civil war was ultimately prevented when the National Film Development Funds Management Committee (NFDFMC) stepped in and offered a solution in the form of bonus compensation to both sides, as follows:

For distributors of domestically made 3D and IMAX films

If the percentage of box office earned from domestic films is between 45 percent and 50 percent, the NFDFMC will reimburse 80 percent of the fees a theater has paid to it.

If the percentage is below 45 percent, but the domestic film revenue is still more than last year’s, the NFDFMC will reimbursed 50 percent of the fees.

Both sides were apparently satisfied with this solution, and the show will go on. China’s theaters will continue to run films from the five distributors, and Back to 1942 will unspool on the 29th.

Having witnessed an endless string of financial shenanigans in China’s movie business, I can’t help feeling that this whole dispute was staged as a ploy to justify an end result that undeniably favors domestic films over imported ones. After all, China’s film regulators have for years twisted and strained to get around the WTO rules, and have often simply reneged on their legal obligations, in order to keep foreign films’ revenues below a 50 percent aggregate share of the box office.

With the attractive NFDFMC bonuses to tempt them, it’s hard to imagine that any theater chain in China will ever again submit an annual report with a domestic film box office share of less than 50 percent. The new rules give them powerful incentive to under-report the grosses of the foreign films they exhibit (if they aren’t already doing so) in order to maintain the desired balance and win their juicy year-end spoils.

As if this shift against the interests of foreign distributors wasn’t injury enough, I’m also hearing rumors that SARFT is planning to find ways to roll back the 25 percent share it pays foreign films to a somewhat lower rate. If you’ve heard anything about this please write me at the email address below.