Strong word of mouth and a weekend surge in attendance led Life of Pi to a surprising box office win last week over the 3D re-release of Roland Emmerich’s 2012. The Ang Lee directed adventure-drama (Chinese title: 少年派的奇幻漂流, or “Young Pi’s Rafting Fantasy”) netted $17 million in its four-day opening, versus a six-day total of $14.7 million for 2012.

After two weeks at the top of the box office, Hong Kong actioner Cold War slipped by 49 percent to a $7.5 million haul. The film has edged out Silent War and now stands as the second highest-grossing Chinese language film so far this year, at $38.4 million.

A pair of animation imports from Hollywood, Wreck–It Ralph and Rise of the Guardians, landed in fourth and fifth places, with $1.37 million and $1.14 million respectively. As is so often the case with non-sequel animated films, neither film has indexed well in China: Ralph will finish in fifth place among all 2012 animated releases in the PRC—notably, behind the Chinese cartoons Pleasant Goat and I Love Wolffy—and Rise of the Guardians will be lucky to crack the top ten (although it will probably surpass Pixar’s latest China misfire, Brave).

Three significant factors are driving Life of Pi’s success: Its strong IMAX/3D footprint; high praise from critics and cultural influencers; and the drawing power of the film’s director, Ang Lee.

China is one of IMAX’s top countries, not only in terms of screen count, but also in revenue per screen. According to anecdotal reports I’m hearing, Life of Pi enjoyed IMAX’s third biggest ever launch in the PRC, behind Avatar and Titanic 3D.

Critics praised the film not only for its lush imagery and superb direction, but also for its Asian viewpoint and deep philosophical essence. And after viewing the film such high profile stars as  Lee Hom, Carina Lau and Shu Qi urged their millions of social media followers to come out and see the picture, helping to trigger a big weekend turnout.

Filmgoers wait on a long line to see ‘Life of Pi’ at a Shenzhen theater.

Finally, China’s filmgoers respond at least as much to top directors as they do to stars. Only a handful of directors have true drawing power, and Ang Lee is one of them. Life of Pi has a shot at topping $50 million in China; the only thing that might hold it back is a competing release from another marquee director, Feng Xiaogang (Aftershock, If You Are the One). It will be a surprise to many if Feng’s new film Back to 1942, which opens on Wednesday, November 29th, doesn’t break all records and become the highest-grossing Chinese language film ever.

Strong word of mouth propelled the Hong Kong cops and robbers thriller Cold War to a $15.2 million take last week, its second straight week atop the Chinese box office rankings. This marks the first time all year that a non-co-pro Hong Kong picture repeated in winning the box office title for two consecutive weeks. The film has grossed a solid $30.6 million after 10 days, which places it fourth among all non-Hollywood titles in the PRC in 2012.

Six new films opened this past week, but none managed to capture much of an audience. First among these new entrants was Rise of the Guardians, which became the latest non-sequel animated film to disappoint its distributors in China, drawing a modest $3.1 million gross in its 3-day debut weekend.

Overall PRC box office has been sluggish of late, with the weekly cume again falling short of the total for the same frame last year, this time by an 18 percent deficit.  SARFT’s blackout periods, a slowing Chinese economy, and a shortage of commercial, audience pleasing pictures have put a damper on the PRC’s box office growth since mid-summer.

Cume for the year is now $2.2 billion, about 23 percent ahead of where it stood at the same time last year. The final six weeks of 2012 will almost certainly beat the $265 million total for the final six weeks of last year, which would put the year-end total above $2.5 billion, but the final tally will fall short of the expectations that had been set through the year’s first 6 months.

This week: 2012 3D opened on the 20th, Life of Pi opens on the 22nd, Chinese thriller Zombies Reborn on the 23rd, and Feng Xiaogang’s Back to 1942 will launch the busy December season on November 29th. 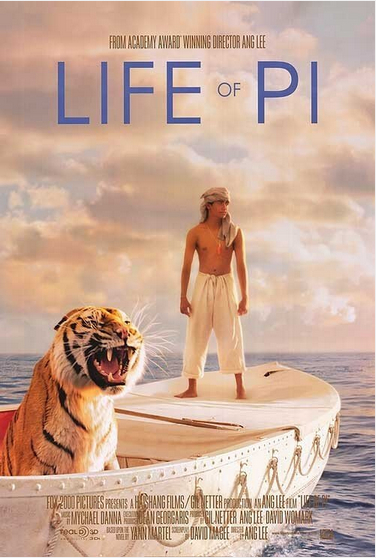 I’m hearing on good authority today that China’s 34th and final revenue sharing import of 2012 will be Ang Li’s 3D adventure Life of Pi. This comes as a surprise to us China film biz handicappers, because all 14 of the ‘enhanced’ film slots had already been spoken for; until today it seemed certain that the 34th slot would go to a 2D film. But according to one of my contacts at the MPAA, the 20 ‘non-enhanced’ slots can actually go to films of any format, so Life of Pi is in the clear..

A big strike against Life of Pi’s China prospects is that it will have a narrow window in which to release. The film goes out wide in the U.S. on November 21st, and since SARFT will impose another blackout on foreign films in December, the Ang Li picture will have to go pretty much day-and-date in China if it is to make any waves there. The film’s release will also be hampered by torrid competition from other imports, with The Bourne Legacy, Roland Emmerich’s 2012 3D re-release, Rise of the Guardians, Wreck-it Ralph, Twilight Breaking Dawn 1, and South Korea’s Deranged all expected to debut in late October and November (the distributors of all these films will be relieved that Resident Evil 5 will not be releasing). Throw in the Chinese blockbusters Taichi II and Feng Xiaogang’s Back to 1942 and you’ve got the makings of a wild and wooly November.

Last week was a modest one at Chinese theaters, though one major milestone was reached as aggregate box office topped $2 billion for the year, more than 2 months earlier than it reached that mark in last year’s record-breaking run. Had it not been for SARFT’s numerous blackouts of foreign films China would have very likely topped $3 billion this year. Even so, aggregate box office will rise by at least 25 or 30 percent over 2011’s $2.06 billon, a growth rate that would have U.S. exhibitors drooling.

The week’s big story was Bait 3D’s impressive $10.5 million blood-frenzy in its second week, nearly double Taken 2’s haul for the frame. The Australian 3D gore-fest has now surpassed Taken 2’s cume in China, and is on pace to land in the PRC’s top 20 grossers of the year. Safe to say that no one predicted Bait would be make such a splash, though in hindsight its success is consistent with China’s love of 3D, action and over-the-top stories.

Total Recall scored a hefty $5.1 million in its first two days of release, further cementing China’s standing as the promised land for busted U.S. action and sci-fi spectacles. Other films that were rejected by U.S. and/or global audiences but embraced in China this year include Battleship, John Carter, The Mechanic, and Lockout.

Two additional action films that performed well in China but fell short of very high expectations were Taichi 0, which will finish its run at around $25 million, and Looper, which should wind up at around $22 or $23 million. Foreign films will enjoy another month or so at the top of the box office before they are shoved aside for the benefit of local productions. In the mean time, look for the 2012 3D release to try and replicate Titanic 3D’s record-breaking run.