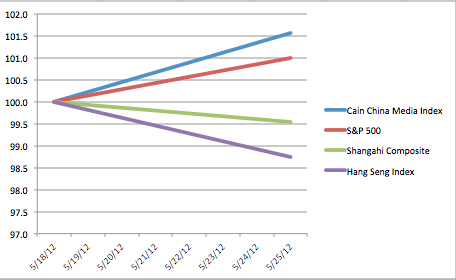 China’s major Youtube lookalikes Youku (YOKU) and Tudou (TUDO) led the index with 20 percent and 18 percent respective gains on news of Tudou’s stellar first quarter results. The two companies are in the process of merging, and with Tudou’s scorching 77 percent Q1 revenue increase and narrowing losses, investors jumped in to drive the stock to its best weekly performance since early March.

5 of the 6 online media stocks in the CCMI gained ground last week. In addition to YOKU and TUDO, Phoenix New Media (FENG) also performed extremely well, posting a 9 percent gain as it beat analyst estimates with Q1 earnings of 7 cents per share. 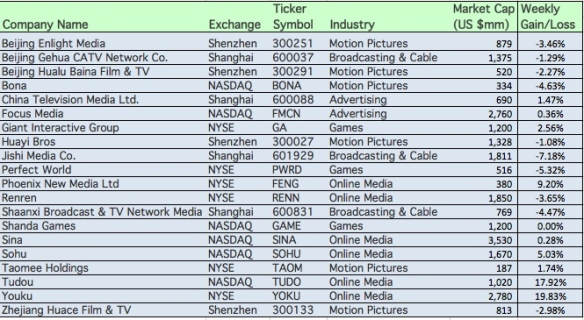 Motion picture stocks fell by an average of 2.2 percent for the week, with only the small cap Taomee (TAOM) managing to eke out a gain. All 3 of the index’s broadcasting & cable stocks also fell, while advertising and game stocks managed modest gains.

Tudou and Youku may be good buys at this stage, with both stocks having broken above their 50 day moving averages with convincing volume. There had been skepticism in the market about the two companies’ ability to contain costs and turn profitable, but these concerns now look to have been laid to rest.

This week I’m inaugurating a new stock index to track the performance of equities in China’s entertainment and media industry. The new index is called the Cain China Media Index (CCMI), and it comprises the stocks of 20 companies in China’s advertising, broadcast & cable, games, motion pictures and online media industries. Most of the stocks are in the mid-cap range (with a few small cap exceptions), trading on the Shenzhen, Shanghai, NASDAQ and New York stock exchanges.

The CCMI will be set at 100 as of the close of today’s markets in the U.S., and it will track the movements of the aggregate market capitalization of the 20 stocks.

My reason for starting the CCMI is to fill what I see as a gaping hole in the universe. I’ve been combing the web lately looking for useful coverage of the growth stocks in China’s media sector and I haven’t been able to find anything interesting or reliable.  So I’ve decided to step into the breach

Here’s why I think this is important, and why you should pay attention:

The CCMI stocks, their ticker symbols and market caps are listed in the table below. 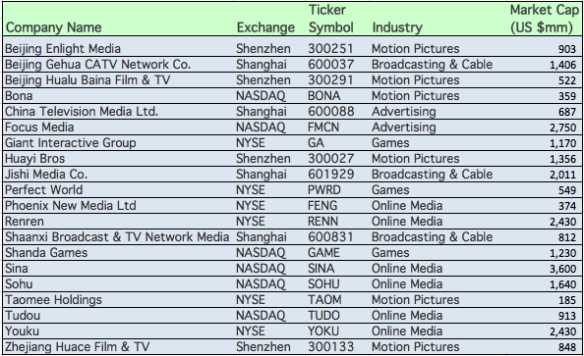 Investors in certain Chinese online media stocks have been particularly well rewarded, as digital online video company Tudou has gained 188 percent in the past 4-1/2 months, and social media site RenRen has gained 76 percent. Bona Film Group has also performed well, gaining 55 percent since the beginning of the year.

I plan to update the index each week and to keep a close eye on trends in China’s media stocks, so keep checking in.

Youku, Tudou, and M1905, among other Chinese content sites, have begun paying for the right to stream movies to their users. It’s an encouraging trend that could signal the beginnings of a shift away from video piracy in China.

Rob Cain is a film producer and entertainment consultant who has been doing business in China since 1987. He can be contacted at rob@pacificbridgepics.com.