The Chinese buyer contingent at this week’s just-ended American Film Market was much bigger and busier than in years past, with dramatically higher attendance, purchases, and prices for US and international films.

One major buyer who declined to be named called it a “frenzy,” adding that “Chinese buyers are buying any and all content they can get their hands on.”

Several attendees complained mid-way through the market week that there was nothing left to buy. An acquisitions executive for China Lion Films—a company with which I work closely—mentioned that she attended screenings where the rights were snapped up before the film’s closing credits. China Lion did manage to pick up one film, the Canadian comedy “Starbuck.” 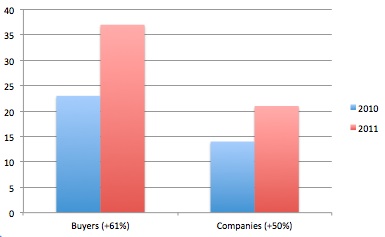 China Film Group (CFG), by far the country’s biggest player in production and distribution, chose to sit out the frenzy, opting instead to use the market as an opportunity to establish relationships.

But many had their checkbooks out throughout the week, only to be outbid or pre-empted again and again.

With competition high, prices for Chinese rights soared at the market, with high 5-figure and 6-figure deals fairly common. These rates are 5 or 10 times higher than what they would have been only a few years ago. Still, prices tend to be somewhat lower for foreign films than for Chinese films, largely because of the value of TV rights, which can go for well over $1 million for popular Chinese language pictures.

Several U.S. distributors, including IM Global and GK Films, are said to have completely sold out their inventory of China rights. IM Global is rumored to have sold its entire 14 film slate to a single Chinese buyer for a package price of $2 million. Another rumor circulating the halls of the Loew’s Hotel was that one Chinese buyer had acquired the rights to 40 films.

Given the limited number of theatrical film distribution slots in China—20 revenue sharing slots and 30 additional flat-fee picture slots—one might reasonably ask what the new rights owners intend to do with all these films.

A more cynical view is that many of the buyers in these transactions may have knowingly made contingent commitments that will likely unravel.  Because Chinese purchase contracts routinely include a standard cancellation provision that allows purchasers to void the deal if a film is barred from exhibition by Chinese government censors, buyers enter into agreements knowing they have an easy out. If a film doesn’t receive a coveted quota slot—even if it does pass censorship—the buyers may invoke the cancellation clauses and nix their payment obligations.

Whatever their ultimate motivations, the buyers at this year’s AFM underscored the fact that China needs product, especially American product, to serve the Chinese movie-going audience’s increasingly voracious appetite. With revenue growth far outstripping Chinese producers’ ability to supply commercially viable films, Hollywood is and will continue to be a hugely important partner for China’s movie distributors.

Rob Cain is a film producer and entertainment consultant who has been doing business in China since 1987. He can be contacted at rob@pacificbridgepics.com.