If you’re not making films in China already, it’s time to take a serious look at doing so.  Just as China has become a dominant international player in many other industries, it has also captured a steadily increasing share of the global theatrical revenue pie, mainly through the brisk growth of its domestic box office.

Assuming current trends continue, and chances are very good that they will, China will soon overtake the U.S. and become an increasingly influential force in the global film business. 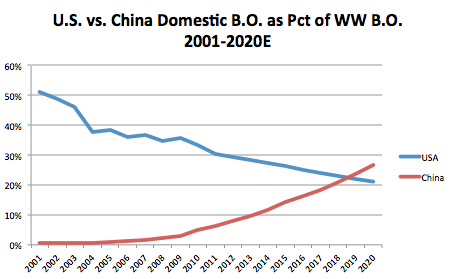 Because China’s stringent import quotas and its rules regarding box office splits limit the share of the domestic pie that goes to foreign-made films, it is growing more and more economically attractive to work with Chinese partners and make films that can meaningfully participate in that market’s domestic revenues. The best way for a non-Chinese producer to do so is produce movies that qualify as official co-productions. Co-productions are the only type of film foreign producers can participate in that are not subject to import quotas and that return to the foreigner a “fair” share—that is, around 40 percent—of the box office receipts.

Co-productions are also the primary vehicle in which most Chinese investors wish to participate with foreign partners. Whereas there are few Chinese financiers who will even consider funding a wholly foreign production, many will gladly invest as much as 50 percent–and in some cases as much as 70 percent–of the budget of a co-production.

There exists a common misperception in America that because so few U.S.-China co-production films have been made, that it must be difficult to make them.  Many in Hollywood seem to think that The Mummy 3, The Karate Kid, and The Forbidden Kingdom are the only co-pros to have been completed. But in fact Japanese, German, Korean and Hong Kong producers are investing heavily in co-productions in China. In 2010, 95 films applied for co-production licenses and 63 were approved, and in 2011 at least 30 co-pros were released in Chinese theaters.

No, making co-production films isn’t necessarily difficult–I’ve done it myself–but there are quite a few steps involved so it’s important to be knowledgeable and well prepared. A good place to start is the State Administration of Radio Film and Television’s (SARFT’s) 2004 document, “Administration of Sino-foreign Cooperation in the Production of Films Provisions.” To save you the trouble of wading through all 23 articles of that document, I’ve abstracted the key provisions below.

Since only the first type, joint productions, is exempted from import quotas and allowed to share meaningfully in theatrical revenues, we’ll only concern ourselves with that type here.

Co-productions must also conform to all the applicable laws and censorship rules that govern domestic Chinese films, and the producers must all be in good standing without any banned films to their names.

Now, the nitty-gritty of the application process.  Articles 9 and 10, which are reproduced below, delineate the required submission materials and procedures: 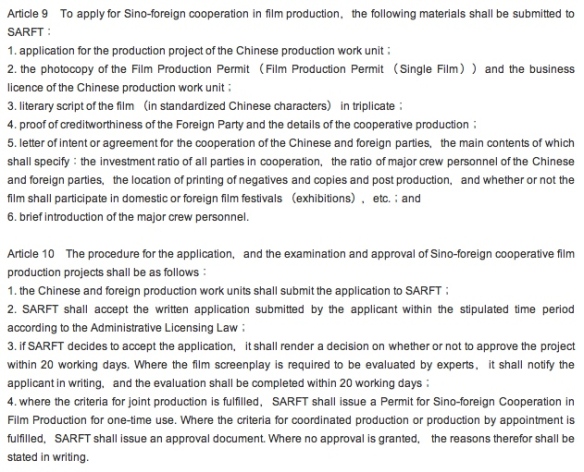 If and when a permit is issued, it is valid for two years.

Another key provision deals with hiring: “Where it is necessary to employ overseas major crew personnel for a joint production, it shall be approved by SARFT, and the proportion of the major actors of the Foreign Party shall not exceed two-thirds of the total number of the major actors.”

This hiring provision is extremely vague—the term “major actors” is often interpreted to mean all personnel of any kind. There are no strict requirements regarding who must be employed on a co-production, nor whether Chinese talent or themes must be featured in the film. Likewise, there are no strict requirements regarding the percentage of the film that must be shot in China; SARFT has the authority to allow co-productions to shoot partly or even entirely outside China. Suffice it to say that the more Chinese cultural elements, featured actors, crew, facilities and locations are involved, the better the odds of obtaining approval.

After the film is completed it must be submitted to SARFT, either in Chinese language or with Chinese subtitles, for review to determine whether it will be approved for domestic exhibition in China and for export.

Given the complexity of the process and the subjectivity of many of the key rules, foreign producers ought to be careful to choose a local Chinese partner who is well connected with the relevant government authorities and who has the fortitude to help take a project all the way through to completion. The difference between an approved co-production versus  an imported quota film or one that receives no Chinese distribution at all can often be measured in millions of dollars of profits captured or lost.