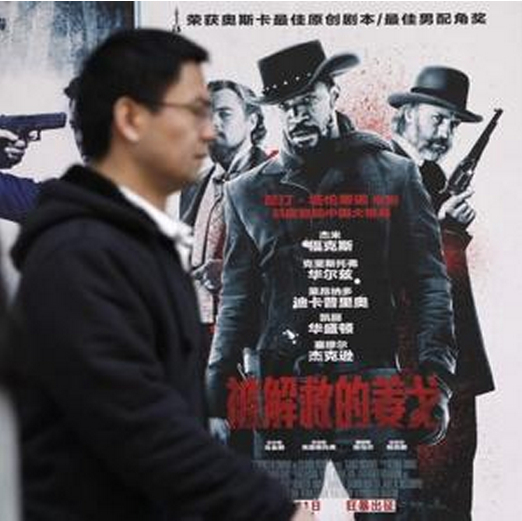 A Chinese filmgoer appears to have a gun to his head for merely thinking about  going to see Django Unchained.

For a brief moment there it looked like China’s film authorities had taken an important and welcome step forward in loosening their censorship policies by allowing the theatrical release of Django Unchained. When news came out last month that the blood-spattered Tarantino film had been approved for an April 11th theatrical debut, many Chinese moviegoers and observers like me were encouraged that the censors’ strict barriers to violence and sexually suggestive material might be coming down at least a little.

No one expected Django Unchained would be shown in China completely intact; it was a marvel that it would be released at all.

But in a rather bizarre and disappointing move on Thursday, SARFT canceled the film’s release on its very first day. In some theaters the film had actually started playing when the projectors were turned off less than sixty seconds later. What legions of Django’s film adversaries failed to do, China’s censors managed to pull off in only a minute: they killed him.

SARFT explained only that the release was canceled for “technical reasons.” They are unlikely to provide any further insight, leaving China’s moviegoers to speculate about what really happened.

Much of the talk in China’s online film forums has centered on the film’s violence and nudity. The Chinese government censors movies before they can be released, and scenes that contain nudity, politically sensitive issues, or graphic violence, must be edited out before a film can receive a go-ahead from the authorities.

The Chinese publication IBTimes noted in this article that even after the censors’ cuts, a couple of scenes remained in the distribution prints that must have been inadvertently overlooked. One of those scenes is a long shot in which Jamie Foxx’s penis can be briefly but clearly seen. In the other Kerry Washington’s nipple can be glimpsed. As an online observer with the handle “Bob Violence” noted “With all the fuss over the violence, maybe someone forgot about the nudity.”

One internet wag in Shanghai with the handle “Alexbenetta” quipped “The government are agitated about the failure of castration of Django in the movie so they decided to do it themselves.”

Another observer, my Beijing-based friend “Firedeep,” speculated that “the sudden last-minute blocking of Django Unchained has a lot to do with the unwillingness of SARFT to see a [ratings] system getting further actively discussed, which is always a sensitive and inconvenient subject for them. Drug War, a drug enforcement themed film which was released last Tuesday has already stirred up some notable talk amongst the public regarding SARFT censorship and demands for the launch of a ratings system. With the coming of the Beijing International Film Festival next week, topics about films will predictably go even hotter. So it is reasonably argued that SARFT blocked Django Unchained to avoid any further heating up of these movie-ratings discussions.”

To which another observer “Polylove” replied “Whatever their intention was, now it backfired. Talk about Django Unchained‘s censorship raised more attention from people.”

Hu Xijin, editor-in-chief of the Global Times, a newspaper run by the People’s Daily, wrote on his microblog: “The harm created by the act (of suddenly suspending the screening of the film) will be much greater than what may be brought by some ‘dangerous scenes’ to the nation’s politics.” Hu said some authorities have frequently made questionable decisions at the expense of the government’s credibility.

As Firedeep noted, Django did manage to set two records in China:

There’s been no word as to whether the “technical reasons” would be addressed or whether Django’s release would be reinstated. The unfortunate and rather ironic reality is that disappointed would-be theater ticket buyers in China will instead wind up watching the uncensored version of Django via internet piracy sites or pirated DVDs.