For the week ending December 25th, 2011, Flowers of War and Flying Swords of Dragon Gate once again held the first and second spots in what was a very good but not great weekend at the Chinese box office.

The $71 million cumulative box office total may look good at first glance—indeed, it was the second best week of 2011 after Transformers 3’s opening week in July, and Flowers set a new single-week record for a Chinese film. But the total box office was actually up only 4 percent on a Chinese RMB basis compared with the same week last year. And considering that there are 45 percent more movie screens operating across China now than at this time last year, the past week’s box office looks downright unimpressive by comparison.

The problem may have been the oversaturation of Flowers and Flying Swords. Those two pictures grabbed up more than 80 percent of China’s 9,000 screens, leaving little else in the theaters for moviegoers who might have wished to see a different film. The strongest new opener, China Film Group’s romance Dear Enemy, managed just $6.5 million in sales, and the second best, The Allure of Tears, brought in $3.8 million. The rest of the field, a mix of 3 holdovers and 3 new releases, every one of them Chinese, brought in a grand total of $600,000.

Flowers of War will pass Beginning of the Great Revival this week to become the highest grossing Chinese film of 2011. With a couple more strong weekends it could possibly challenge Kung Fu Panda 2’s  $92 million China gross for the number two spot among all films released this year. But even if it does reach that lofty height, Flowers will only recoup a third or so of its negative cost in China. In order to break into the black it will have to gross, at minimum, $120 million in the international marketplace. This has only happened once before for a Chinese film, when Crouching Tiger, Hidden Dragon became a breakout hit in the United States back in 2001. Flowers of War lacks the compelling narrative, the exotic appeal, and the universally resonant themes that Crouching Tiger offered, so the possibility that Flowers might replicate those numbers seems remote. 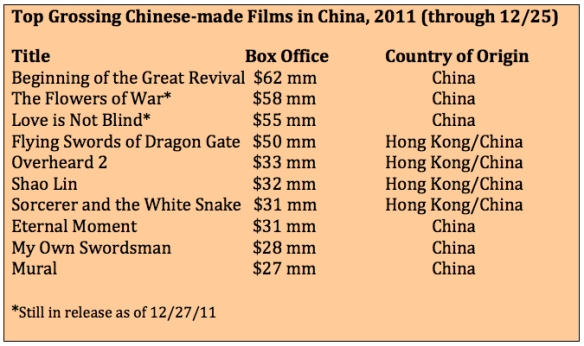 The most important box office news this week is that China’s cumulative gross for the year has definitely crossed $2 billion, making it only the third country in history, after the U.S. and Japan, to reach that mark. Even more remarkably, it was only last year that China crossed the $1 billion mark for the first time ever. The above analysis notwithstanding, a $71 million box office haul in one week would be extraordinary anywhere in the world outside North America; it’s indicative of China’s incredible growth that the number fails to impress only by comparison against last year’s numbers.

All told, the top 10 films took in $34 million, a 26 percent improvement over the same frame last year. Aside from East, new releases failed to generate much interest, with Tropa de Elite 2 (the first Brazilian release in China this year) managing just $1.55 million in ticket sales, and the China/Hong Kong horror co-pro Night Mare failing just short of $1 million. Aside from the moderate summer success of Mysterious Island with its $13.6 million tally, the horror genre still has yet to prove itself with modern Chinese audiences.

East Meets West marks something of a return to form for Lau, whose collaborations with Wong Kar-wai (Chinese Odyssey 2002) and Stephen Chow (Kung Fu Hustle) early this decade were critical and commercial successes. After a few missteps with recent films like Metallic Attraction: Kung-Fu Cyborg, Lau showed with East Meets West that he still has some chops. As one reviewer put it, “The film is relentlessly energetic and brimming with enthusiasm.”

U.S.-made films continued to generate solid, if not blockbuster, business, with The Adventures of Tintin crossing the $15 million threshold, the 32nd film to reach this level in 2011. Rise of the Planet of the Apes wound up its run just shy of $31 million, making it the 13th highest grossing film in China so far this year. With no major Hollywood releases slated at the Chinese box office this week, it’s a near certainty that Chinese language films will rule the box office for the fourth week in a row.