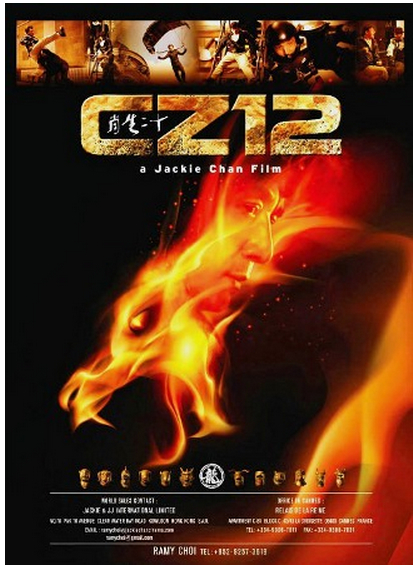 Jackie Chan’s action comedy CZ12 took in $37.6 million last week in leading China to another record-smashing session of $86 million in total weekly box office, a 139 percent increase over the same frame in 2012.

China’s multiplexes have been overflowing with business of late. After a record-breaking December 2012 that saw box office takings increase by 74 percent over December 2011, January looks set to continue the sizzling pace.

Current box office champs CZ12 and Lost in Thailand have positively walloped last year’s January frontrunners, The Flowers of War and Flying Swords of Dragon Gate. The latter two films were 25 days into their runs by January 8th, 2012, with Flowers at an $88.5 million cume and Flying Swords at $79.4 million. This year, by comparison, as of January 6th Lost in Thailand had finished its 26th day with a $182 million cume and CZ12 its 18th day of release at $113 million. The two current films have earned 76 percent more revenue in 6 fewer screening days than last year’s leaders.

CZ12 is now the 2nd highest grossing Chinese language film and the 4th highest grossing of any film, domestic or foreign, in mainland history.  Lost in Thailand is poised to surpass Avatar‘s all-time box office record of $209 million by the end of this week or early next.

With the long-awaited Wong Kar-Wai action-biopic The Grandmasters opening today and Skyfall marking the return of Hollywood fare to the PRC on the 21st, January will likely be another record month. 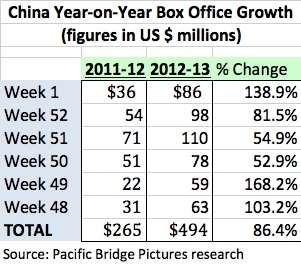 This extraordinary year-on-year growth signals an inflection point in China’s movie market evolution. The rapid addition of new cinema screens has certainly contributed to the mainland’s blistering run, but that’s only part of the story. More importantly, what has changed is that moviegoers have been coming out for Chinese movies with unprecedented frequency. They have shown that a quality local film can draw just as well or better than a Hollywood blockbuster. If China’s filmmakers can continue to make movies that Chinese audiences want to see, China’s trend of annual box office increases of 30 to 40 percent should continue through the rest of this decade.