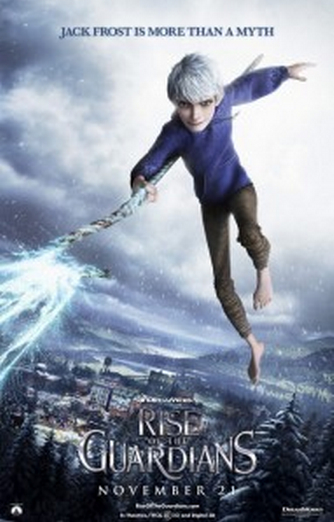 Strong word of mouth propelled the Hong Kong cops and robbers thriller Cold War to a $15.2 million take last week, its second straight week atop the Chinese box office rankings. This marks the first time all year that a non-co-pro Hong Kong picture repeated in winning the box office title for two consecutive weeks. The film has grossed a solid $30.6 million after 10 days, which places it fourth among all non-Hollywood titles in the PRC in 2012.

Six new films opened this past week, but none managed to capture much of an audience. First among these new entrants was Rise of the Guardians, which became the latest non-sequel animated film to disappoint its distributors in China, drawing a modest $3.1 million gross in its 3-day debut weekend.

Overall PRC box office has been sluggish of late, with the weekly cume again falling short of the total for the same frame last year, this time by an 18 percent deficit.  SARFT’s blackout periods, a slowing Chinese economy, and a shortage of commercial, audience pleasing pictures have put a damper on the PRC’s box office growth since mid-summer.

Cume for the year is now $2.2 billion, about 23 percent ahead of where it stood at the same time last year. The final six weeks of 2012 will almost certainly beat the $265 million total for the final six weeks of last year, which would put the year-end total above $2.5 billion, but the final tally will fall short of the expectations that had been set through the year’s first 6 months.

This week: 2012 3D opened on the 20th, Life of Pi opens on the 22nd, Chinese thriller Zombies Reborn on the 23rd, and Feng Xiaogang’s Back to 1942 will launch the busy December season on November 29th.

The Hong Kong cops and robber thriller Cold War got off to a hot start last week with a $15.4 million 4-day debut, enough to make it the 3rd best Chinese language opener of 2012 and 12th best among all PRC debuts this year. For first-time writer-director Sunny Luk and his all-star cast, Cold War warmed up what had been a moribund Chinese box office, marking the strongest opening for any film on the mainland since Expendables 2 knocked off $25 million in its opening weekend two months ago.

Produced and distributed by Bill Kong’s EDKO Films and starring Aaron Kwok, Tony Leung, Andy Lau, Byron Mann and Aarif Lee, Cold War will likely rack up another strong week before serious competition shows up at Chinese theaters, with the 3D re-release of 2012 arriving on November 20th and Life of Pi drifting in on the 22nd. Mega-director Feng Xiaogang’s Back to 1942 will almost certainly freeze out Cold War when it debuts on November 29th.

Reaching $31 million in its third week, The Bourne Legacy is now Universal’s 2nd best performer in China this year after the surprise hit Battleship. With a few more weeks left in its run, Bourne should easily surpass the low end of the $35 million to $50 million range that I had predicted for it.

Wreck-it Ralph’s 6-day opening tally of $5 million continues Disney/Pixar’s long string of misfires in China. The only consolation for Wreck-It Ralph is that it didn’t open as poorly as Brave, which managed a tepid $4.6 million over its entire PRC run back in June. Disney/Pixar’s last truly successful animation release in the PRC was more than two years ago when Toy Story 3 tallied a then respectable $16 million box office total over its 4-week run in 2010.

Bait 3D wound up its extraordinary run by biting off another $500,000 to finish at $25.7 million, by far the best performance ever in China for an Australian film, and the biggest gross for any non-Hollywood import.

Aggregate weekly national box office was $39.3 million, down 23 percent relative to the same week last year. But the year-to-date tally of $2.13 billion is already 3 percent ahead of the full-year total for 2011, and with 7 weeks left in the year, China is well on its way to setting yet another annual box office record.

In what is assuredly an all-time first, two horror films ranked among the 5 top grossers at the Chinese box office last week. Although the horror genre has been rather a rarity at PRC multiplexes, due in large part to SARFT censorship strictures, the tide may now be turning for them. Chinese censors have been noticeably friendlier of late to violent and even gory low-budget horror flicks, and audiences have been showing up for them in increasing numbers.

Fewer than a dozen horror films have unspooled in Chinese theaters in the past two years, so two such films screening at the same time feels like a veritable gore-fest. The two pictures are the Australian shark attack thriller Bait 3D, which at a $25 million cume is easily the highest-grossing horror film in China’s history (I’ve made the admittedly subjective judgment call of classifying Prometheus as a sci-fi thriller), and the new French entry Derrière les Murs, a period horror-thriller about a young female novelist who isolates herself in the countryside to write her new book. Before long the writer is haunted by visions and nightmares while the villagers grow worried as several little girls mysteriously disappear.

Derrière’s$2.2 million opening weekend tally may not seem like much, but it’s good enough to rank as China’s fifth best horror debut of the year, and among the country’s top ten horror grossers of all time. Given the encouraging signs, now may be a good time for American and other foreign horror-meisters to sharpen up their fangs and take a bite of China’s booming film business. 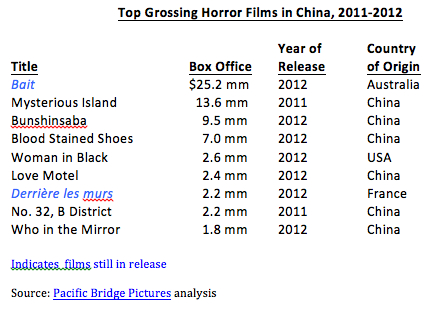 In other multiplex action, The Bourne Legacy held off the Chinese action movie Taichi 2 to retain the number one spot for the second week in a row.  Total Recall slipped to third, adding $4.5 million to what is now a nearly $17 million cume.